Many of our customers ask us if homeowners insurance covers the cost our raccoon removal services. Other clients want to know if State Farm or Allstate cover the cost or repairing damage caused by raccoons, squirrels, vermin and rodents. People even call us to ask us if us if a raccoon is considered to be vermin or a rodent, because they want to find out if their insurance policy will cover our fees. We also get a fair amount of questions about insurance coverage for the removal of bats, birds and pests.

How to Humanely Get Squirrels Out of Your Attic, Roof & Chimney [Tips from Squirrel Experts in Ohio]

Information for Homeowners and Property Owners

It is important to recognize that insurance policies and insurance agents decision vary significantly so it is always advisable to try to get your insurance company to cover the cost of trapping and damage repair.

One of the most important things to do at the beginning of an attic cleanup and decontamination project is to call your insurance agent and request a claim number. If your insurance agent or company initially informs you that you will not be covered, this is often erroneous and a case of misinformation on the part of the insurance company. Raccoons and bats are dangerous to a homeowner, their family and the property value of a building. Because this is a gray area in the insurance industry, agents and receptionists often accidentally state that this cost will not be covered. A little patience and determination will often result in an insurance company “changing their stance” on a coverage claim. This is the first step to find out if your insurance company will pay for the cost of trapping a nuisance animal, attic cleanup and decontamination, damage repair, insulation removal and replacement.

If the cost of damage repair is rejected over the phone, you should request a rejection letter or denial letter explaining why the claim will be denied. This document should be mailed or emailed to you. Once you receive this letter, you can look for the phrase “vermin” or “pollution”, which historically excludes claims. If the damage has been caused by bats or raccoons, these animals are not usually considered by the courts to be vermin. Some insurance policies are now specifically excluding raccoons and bats for this very reason. In some cases, during the process of writing the rejection or denial letter, an insurance company representative will realize that you are, in fact, covered. Sometimes a letter written by the homeowner or property to the insurance agent, stating the reasons why they should be covered does the trick. In some cases, houses and buildings can not be sold if raccoon, bat or animal damage is not corrected. Feces and bio-hazards must be removed, insulation must be replaced, animals must be trapped and excluded and entry points must be closed securely.

Just don’t take no for an answer until you get the proper facts. The importance of getting your attic cleanup and decontaminated can not be understated. You family’s health and security is worth the time and aggravation of corresponding with your insurance company or agent.

Call 440-236-8114 day or night to schedule an inspection and to talk with a licensed and certified wildlife control expert. CWR pest control technicians are experts at raccoon, bat, skunk, squirrel, bird and mice trapping, removal and prevention in Columbus, Cincinnati and Cleveland, Ohio. 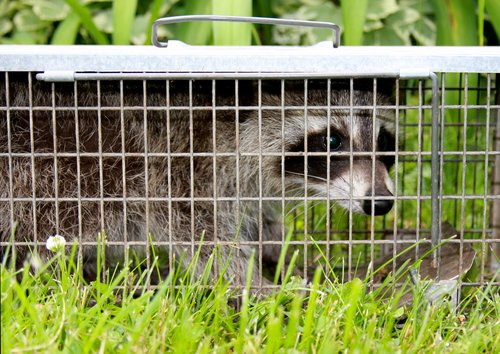 This list of mammals of Ohio includes a total of 70 mammal species recorded in the state of Ohio. Of these, three (the American black bear, Indiana bat, and Allegheny woodrat) are listed as endangered in the state; four (the brown rat, black rat, house mouse, and wild boar) are introduced; two (the gray bat and Mexican free-tailed bat) are considered accidental; and eight (the American bison, elk, fisher cougar, Canada lynx, gray wolf, American marten, and wolverine) have been extirpated from the state. Read more here.

Raccoons In Ohio [From The Ohio Department Of Health]

Raccoons can be found throughout the state and in all habitat types, with the majority being found in northwestern and central Ohio along rivers and streams bordering farmland habitats. They have also moved into suburban and urban areas and can live almost any place where there is food for them to eat and a den to serve as shelter. Many of them live, temporarily at least, in drain tiles and sewer systems. Raccoons defecate in communal sites called latrines. They are nocturnal and are up and about during the dark hours of the night. Even though raccoons do not really hibernate, they can sleep for days, and even weeks at a time, during the cold winter months. Read more here.

About Wildlife In Ohio