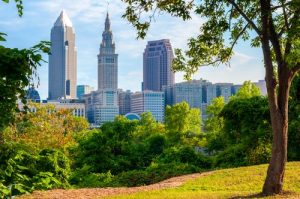 PICTURE OF CLEVELAND SKYLINE – Clueless Cleveland Councilman Admits At Public Hearing To Improperly Releasing Dozens Of Nuisance Animals | Published By Cleveland.com On February 18, 2021 | During a Wednesday hearing on nuisance animals, City Councilman Joe Jones abruptly admitted to improperly releasing raccoons that he said he had trapped. The admission, made after Animal Control Officer John Baird reported that state law requires trapped animals to be euthanized by someone with a special license, drew chuckles from Jones’ colleagues. In previous years, the City Of Cleveland has spent $75,000 to $80,000 to hire contractors to trap and dispose of nuisance wild animals, skunks, opossums and groundhogs. Health concerns related to the coronavirus pandemic hindered the city from establishing contracts with nuisance wildlife control operators in 2020. That allowed the population of nuisance animals to grow. Members of the City Council said they’re getting more complaints from residents about the animals. The animals can spread disease and also damage property.